My little Steampunk artist created the idea of being a Steampunk robot. He drew me a picture and pointed out essential details. The helmet had to be clear – like a bubble. It had to have lots of buttons and gears. Stuff needed to light up.

What’s a non-sewing Mom to do?

Last weekend in the preparation for a Halloween party, I entered spray painting Steampunking boot camp. Of course there was no teacher. Never-the-less I think the results were pretty satisfying for someone who literally hadn’t used spray paint prior to this year.

Thank goodness for stick-on velcro. I used almost 5ft of it. After spending an afternoon and evening cutting cardboard gears and plotting to cut more from foam, we discovered we had a toy with silver/black gears which might work perfectly! Grandpa sourced some tubing for us and a plastic welding mask. Grandma found me a clear plastic bowl.

For the base costume I used a store bought “suit”. We kept the back half of the mask and added it to the helmet (after a good dose of spray paint).

Three elements of the back part of a full head mask, the plastic bowl and some cheesecloth + lots of spray paint and double-sided tape.
The top bubble is a vending machine bubble velcroed over an led tea light so that you can turn it on and off. The gears cover the tape and the velcro which holds it all together. 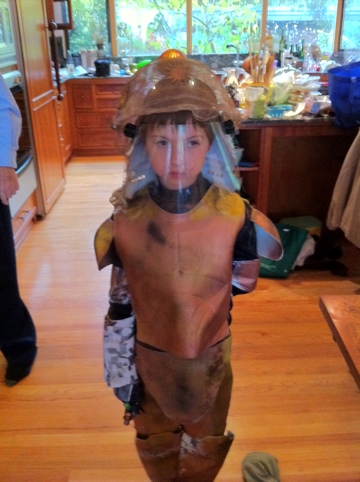 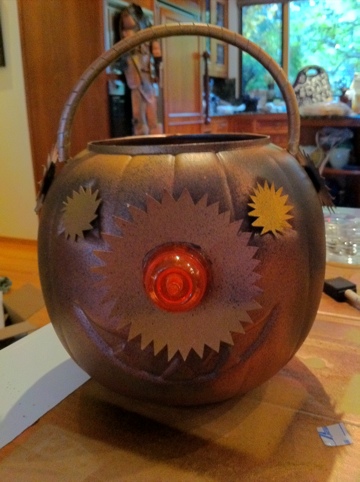 Trent wanted a Steam-pumpkin so we got one of the plastic orange ones and gave it a makeover. He used a hacksaw to cut the back end of a balloon blowing fitting to make the orange nose bubble. We fitted another tealight through a hole in the inside so that the nose lights up and the switch is inside the pumpkin. Spray paint covered tubing covered the handle. 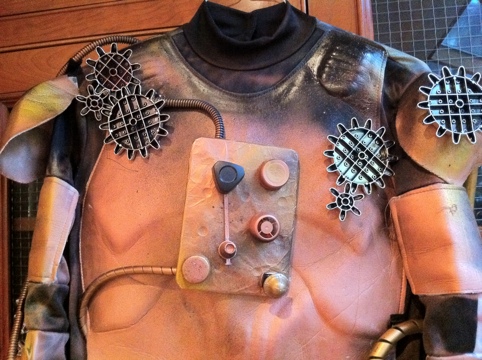 The Control panel, The Backpack, & The Belt

Both velcro onto the suit. I was faced with a challenge though when I discovered that velcro adhesive doesn’t stick to spray painted surfaces. I used regular adhesive tape to remove paint so that I could get the velcro to stick. The face plate is a plastic toy piece covered with aluminum foil. The knobs are water bottle and juice squeeze tops except for the bottom one which is a custom made Lego helmet knob which actually turns. The tubing velcros onto the back. 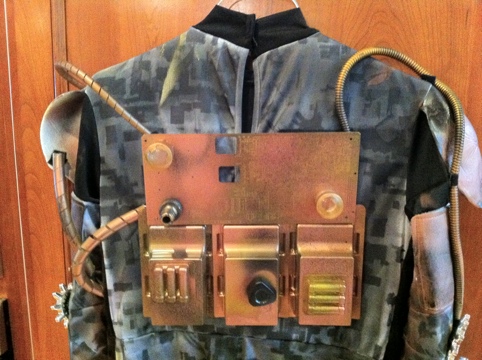 The backpack is made of a circuit board we removed from a piece of electronic equipment Trent disassembled, plastic packaging pieces, some old knobs and plastic water bottle tops. It’s glued together and then velcroed onto the suit – but must be removed for him to get in and out. Tubing velcros onto the back.
The belt has a plastic bug viewer and two water bottle tops modified with big red LEDs and battery packs underneath. Two exposed leads are twisted to turn them on and off.

It only took about 8hrs of work. But I’m starting to be really good at spray painting.

The little Steampunk artist is thrilled with his vision come to life.

6 thoughts on “A Steampunk Halloween”

My #mlkdaysale runs through Tuesday! https://etsy.me/2N3ooRM Link in profile. #etsyshopsofinstagram #etsysellersofinstagram #etsysalesevent #etsysale
New year and new #moocards And I got stickers!!! Happy 2020!!! #moocardshavearrived #moocardsrock @moo
Peek into my shipping and packaging drawer... because I love to wrap and I love #stationaries and washi tape. Most of these are from @niconeco_zakkaya my favorite store 😻
Made some wax seals for packages! Sending the first shipment out for the year! Happy 2020 #waxseals